Has RCS Crossed the Chasm?

Knowing the answer to this question, or at least understanding why asking it is important, can help operators and key stakeholders in the mobile ecosystem better evaluate the future of this new technology.

Forecasting the adoption of any new technology is an inherently inaccurate process with little reasonable chance of quantitative success. Mahender Singh, Executive Director, MIT Global SCALE Network in Asia, noted in his course on new product forecasting that “…a study of 53 products from 16 firms found that the mean forecast error was 53%.” Nevertheless, even if numeric forecast accuracy is elusive, knowing generally if a technology is likely to succeed may be useful in adjusting long-term, strategic business directions.

The chasm referenced in the title is the conceptual obstacle to the adoption of new technology described by Geoffrey Moore in his book,Crossing the chasm: marketing and selling disruptive products to mainstream customers.2 Moore builds on the seminal work of Everett Rogers who, in his 1962 article titled Diffusion of Innovations,3 suggested there are five phases that could be identified in the adoption of new ideas or technologies.

The five phases and their relative percent of the population are described as follows. 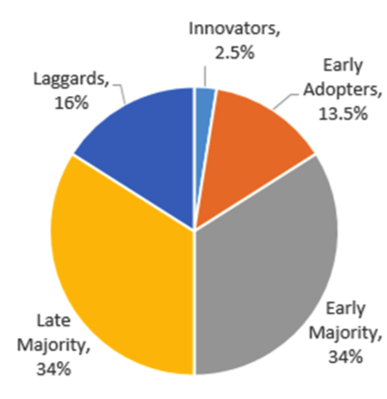 The population percentages are simply one, two, or three standard deviations in a normal distribution that can be visualized in the following graphic. 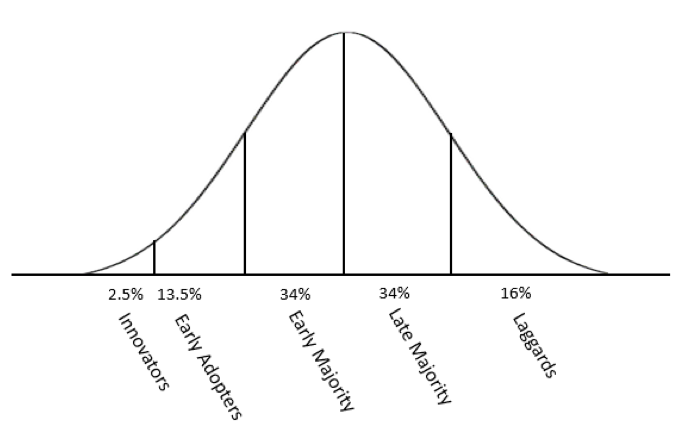 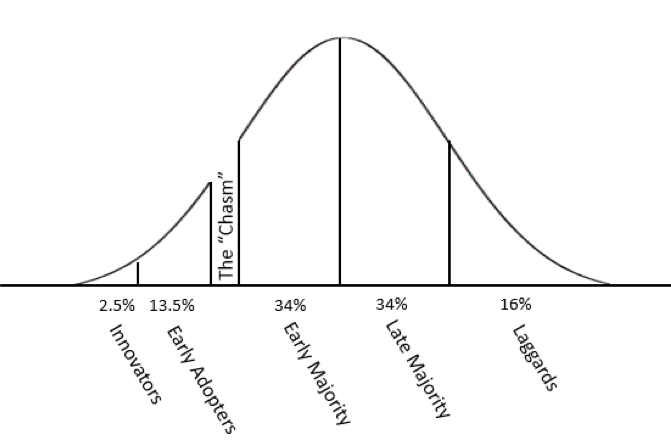 Conversely, technologies that successfully traverse the chasm demonstrate sufficient momentum for the Early Majority to overcome their risk aversion and adopt the technology. That does not mean that every technology that crosses the chasm will be a run-away success in the market. However, the likelihood of mainstream adoption is increased as a result of its longevity in the market.

While a discussion of technology adoption and innovation diffusion may be interesting on theoretical grounds, it also provides a tangible construct for the evaluation of products such as RCS. For organizations considering offering a new technology, understanding where that technology falls on Everett’s adoption curve may provide guidance on allocation of limited development resources. For example, if the assessment is that the technology has not successfully crossed the chasm, then the business decision to proceed with product development becomes an exercise in risk tolerance. If the assessment is that the chasm has been crossed, then an organization considering offering the technology must also consider that they will be lagging behind the competition and must adjust their go-to-market plan accordingly.

Accurately determining where a technology is in its adoption cycle requires a solid understanding of the market. In the case of RCS, not only does the diffusion of RCS through the universe of smartphones need to be considered, but also that the penetration of smartphones themselves is an important diffusion variable. In both cases, those immersed in the industry should be cognizant of the ever-present possibility of observer bias when assessing diffusion parameters. Specifically, a person immersed in studying emerging messaging technology may be susceptible to observer bias and generalize that their observed environment is representative of the broader, catholic environment.

There have been numerous discussions presented and opinions offered regarding the relative significance of RCS and Over-The-Top messaging applications, such as WhatsApp, to mobile operators. What is lacking in this body of work is an assessment of the heterogeneity of mobile subscribers and a discussion of the psychosocial factors that are operative in the adoption of new technology.

Mobile subscribers are a diverse demographic population of individuals that can be stratified by numerous attributes that may include age, income, geography, or ethnicity.4 Each of these strata will have different technology adoption kinetics. For example, younger subscribers may be more open to trying new technology that may lead them to try an OTT application, while an older demographic segment may be reticent to download the latest messaging app. If attention is disproportionately focused only on the former group and then considered to be representative of the entire market, then inferences regarding the eventual penetration of a given technology may be inaccurate.

For example, with over 500,000,000 reported users,5 there is little ambiguity of the popularity of WhatsApp. However, it’s a relatively youthful user population with half of the users being 36 years of age or younger.6 The key point is that comparing the adoption of an OTT messaging app to RCS may not be a useful exercise because there are fundamentally different drivers for the adoption of each technology.

When considering OTT, not only is there the question of representativeness of OTT users of the universe of wireless consumers, but there is also the caveat of generalizing the effect observed in a small group to the entire global wireless subscriber base. The WhatsApp user numbers are large, but compared to the total global wireless universe of seven billion they account for only 7%. The chart to the right provides visual context for this relationship. The area of each circle represents the number of users in each group. 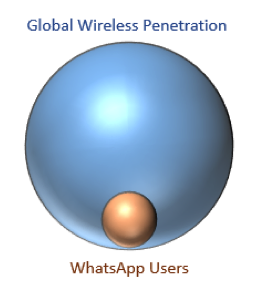 The Academic Assessment of RCS and OTT adoption

A number of social-psychological-based technology adoption models have been published in peer reviewed literature including the Technology Acceptance Model (TAM), the Theory of Reasoned Action (TRA),7,8 and the Unified Theory of Acceptance and Use of Technology (UTAUT).9 Although some of these models have been criticized,10 they represent an attempt to identify the personal characteristics of users that adopt new technology such as performance expectancy, effort expectancy, social influence, and facilitating conditions.

Although several of these behavioral models have been used to study the adoption of mobile technology,11 as of this writing none have appeared in the literature related to OTT messaging apps or to RCS. The lack of behavioral analyses coupled with a heterogeneous mobile subscriber population essentially means that any forecasts of the adoption of either technology is likely to have a high coefficient of error. Because of this fundamental uncertainty, definitive statements or authoritative opinions regarding the ultimate success of either OTT apps or RCS should be evaluated with circumspection.

Has RCS crossed the chasm?

As of this writing, the GSMA has reported that RCS has launched in 32 countries and a total of 87 operators have committed to launch within the next 18 months.12 However, even if a technology has crossed the chasm there is no guarantee of ultimate success- it can still falter. Not every technology that traverses the chasm is destined to achieve universal acceptance and ubiquitous market penetration. The chasm is filled with technologies (and companies) that failed to achieve momentum sufficient enough to continue their journey. Indications are that RCS has achieved enough momentum to cross the chasm and is continuing its journey along the adoption curve.