There’s no doubt that text messaging has changed the way the world communicates. But let’s be honest, there are a lot of things that SMS (short message service) just can’t do compared to messaging services like iMessage, WhatsApp, and Facebook Messenger.

This is understandable considering how far technology has come since SMS was developed in the early 1990s. Fortunately, the Telecom industry took notice and developed a new global messaging protocol called Rich Communication Services (RCS).

Unlike SMS, the new RCS messaging protocol leverages data connectivity over new IP networks to deliver multimedia capabilities and personalization features for both Person-to-Person (P2P) and Application-to-Person (A2P) communications. This includes the ability to see when contacts are typing and receipts for when messages are read. Sending GIFs and high-res photos, videos, and files. Sharing location and contact information directly within a message and the ability to choose between one-on-one chat and group chat.

Now that RCS is available on all four major U.S. carriers and on more than 84 networks in nearly 60 countries, let’s debunk 10 myths that have surfaced around this new next-generation messaging service.

1. RCS is a Google Product


RCS is an operator protocol developed by the GSMA and enabled through the Android OS, which was developed and is operated by Google.

In 2007, the Telecom industry began working on the idea of RCS to help carrier messaging stand out among the influx of OTT messaging apps that were bringing more enhanced messaging features to market. By 2008 the GSMA, an industry organization that represents the interests of mobile network operators worldwide, took over managing the development of RCS to ensure it would make it into the market on a global scale. After years of defining technical specifications, the GSMA published the first globally agreed-upon standard called the Universal Profile (UP) in November of 2016. These technical specifications were designed to streamline and standardize the deployment of RCS by outlining the key features under one cohesive standard. Google became involved with RCS in 2015 after acquiring leading RCS provider Jibe Mobile. In June 2019, Google made the decision to use RCS as the standard protocol within its own native messaging app on all Android OS devices in an effort to accelerate RCS adoption.


RCS offers superior messaging but SMS will continue to be a key network component for operators.

While RCS offers many more features than traditional SMS messaging, the SMSC enables more than just the P2P SMS messages being sent within the operator network like phone activations, roamer registration and much more. So even though RCS is forecasted to become the native P2P messaging service, the SMSC is still important. It could be several years before every operator network is running on LTE/IP and every subscriber has an RCS activated device.

3. RCS Devices Are Not Available

Android OEMs like Google, Samsung, and LG all support RCS. As the official native messaging of Android which has an approximate user base of five billion, the RCS user base will continue to grow as new smartphones are introduced to the market. In the meantime, any RCS messages sent to a handset that does not support RCS will automatically fall back to SMS/MMS protocol.


OEMs must activate the RCS clients within the devices to work on each operator's RCS network.

What this means is that while operators are responsible for launching an in-network RCS solution, the OEMs are responsible for activating the RCS clients to enable connection to the operator’s network. Even if an operator has launched an RCS service, they are still reliant on the OEMs to make it work for their subscribers. 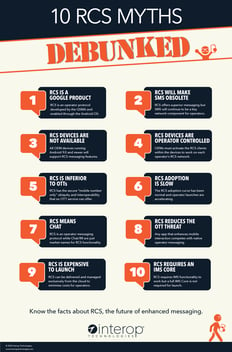 5. RCS is Inferior to OTTs

RCS has the secure "mobile number only” ubiquity and interoperability that no OTT service can offer.

As an operator-led service, RCS comes with the same trust and assurances as SMS. Meaning it will become the native messaging feature on all Android handsets and mobile networks, guaranteeing message delivery, low to zero latency, and security and regulatory compliance. It will also work across networks, unlike the fragmented messaging landscape of OTT messaging services that require subscribers to download and use the same app in order to communicate.


RCS adoption has had a normal adoption curve and operator launches have continued to accelerate.

There has been much speculation surrounding the rate of adoption for RCS. Mainly this has to do with the fact that the concept of RCS is at least a decade old. That being said, earlier iterations of the service failed due to a lack of an agreed-upon set of specifications. Since the GSMA published the first UP specifications, adoption has progressed at a relatively normal adoption rate for the industry. Analysts at Mobilesquared expect that operator launches will continue to accelerate, predicting that more than 450 mobile operators will be running RCS by 2023. In the end, operators are not responsible for the entire adoption of RCS. The actual “making it universal” depends on providing essential value from the service, which also requires participation from the device manufacturers, aggregators, and all other ecosystem players.


RCS is an operator messaging protocol while Chat/IM are just market names for RCS functionality.

RCS protocols and standards were developed by mobile carriers within the GSMA working group. As a positive sign of RCS’s strategic value to the mobile industry, Google has spearheaded adoption of the new standard by making it the native messaging service on all Android devices marketed as RCS Chat.


Any app that enhances mobile interaction can compete with the native operator messaging experience.

RCS does give operators an opportunity to fight for subscriber loyalty, but there are new digital services coming into the market daily and any one of those could steal attention away from the native and operator-controlled messaging experience.

9. RCS is Expensive to Launch


RCS can be delivered and managed exclusively from the cloud to minimize costs for operators.

Operators have been struggling for years with the loss of revenues from traditional telco offerings and they may not have the capital to invest in an on-premise solution with an unknown time frame for reaching full adoption. But that doesn’t mean that new solutions like RCS are too expensive to launch. With the availability of the cloud, operators are able to launch RCS quickly and cost-effectively.


RCS requires IMS functionality to work but a full, in-network IMS Core is not required for launch.

Both the IMS Core and RCS are IP services that were developed to work in tandem, but Interop has developed its complete RCS Suite to include the key IMS functions needed for RCS. This allows operators who aren’t ready to purchase a full IMS Core to launch RCS quickly.

There's a ways to go before RCS is working as seamlessly as SMS has for the past two decades, and there may even be some bumps along the way. But once it is working at its full potential, the limits are boundless for what can be accomplished in the default-messaging app, after all, its how the world communicates!